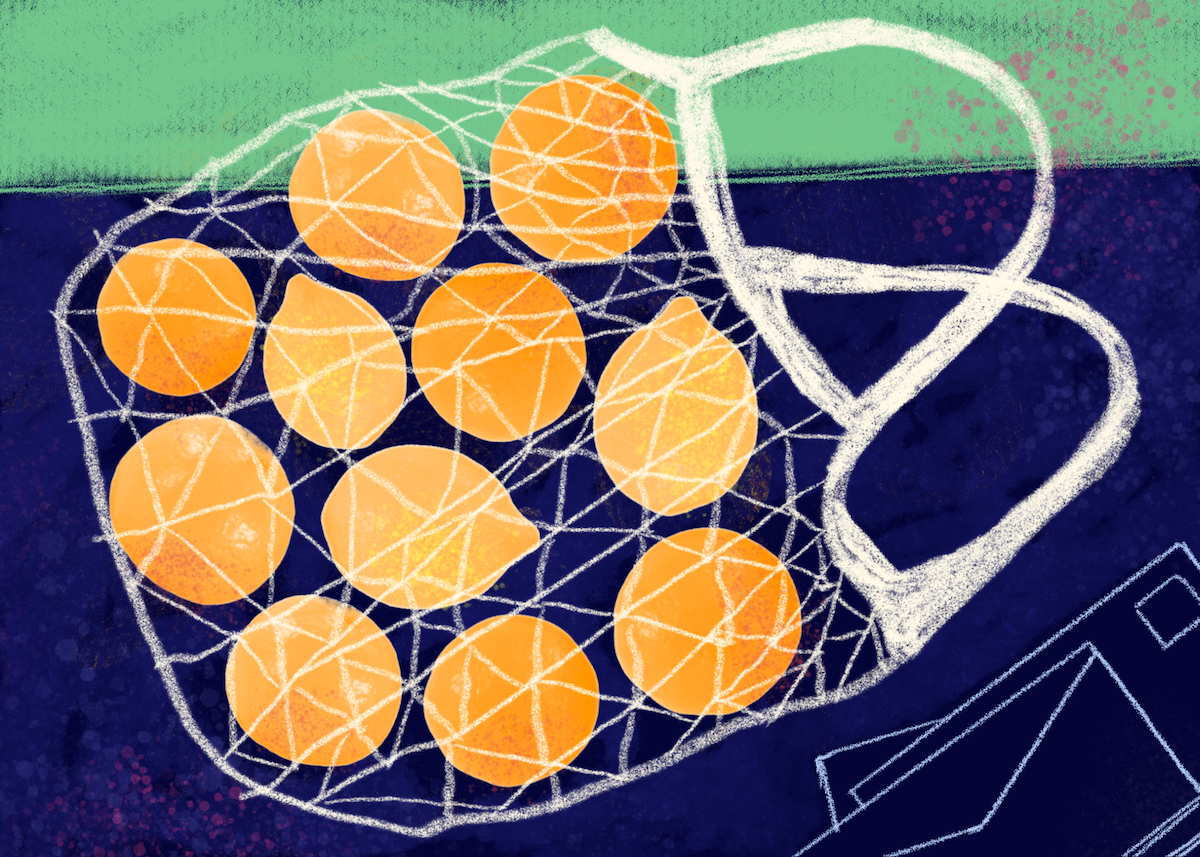 “Can you look at this?” My mother asked as we sat and waited in the car for our turn at the food pantry, masks on. She shoved a piece of paper in my hand. It was a letter from a life insurance company.

My mom recently turned 73, which makes us 38 years apart. When my father died in 2003, she relented and purchased her own policy. Month after month, she religiously pays $120 for a $100,000 payout when she dies.

“It’s just a letter stating that they updated your address,” I said in Vietnamese.

“I told them a few years ago to add your brother Long to the policy, but somehow they never did!” she exclaimed and sighed.

For all the things my mother and I talk about, life insurance is typically not one of them.

I asked her what she wanted done for her funeral.

“Oh, don’t worry about it. I already purchased a plot!” This was news to me. I had no idea that she’d already prepared for her death. It was only recently that she completed chemotherapy. But she’d purchased the plot before she got cancer, she said.

The line moved slightly forward. Finally, it was our turn. We waited for the volunteers to load up the food boxes in the trunk. There was a lot of food—four boxes total. The boxes were filled to the brim with a variety including almost expired dairy, expired meats, grains, beans, pastas, snacks, vegetables, and fruits. The boxes were supposed to feed a family of four for a month.

Ever since COVID-19 hit us like a heavy brick, my mother and I have been spending time together at food pantries. One morning she called me and said in a hurried voice, “I want to get some food.” I assumed she wanted to go to the grocery store.

No, my mother is savvier than that. She always has been. Creative is what I’d call her when it comes to money. She grew up with very little of it, during the 1950s. When the ‘60s and ‘70s hit, she was seventeen and set up to marry my father. She had hardly any education and little choice in what was happening in her country.

The Vietnam War ravaged us all, my mother more than many people I know.

There’s a story she told me once about my brother Long. He was born in 1968, at the cusp of the war. One day, the northern Vietnamese descended upon her village and raided all the houses, looking for women. She hid under her house’s floorboards for hours. Luckily, my brother was a quiet baby, and he didn’t utter a single cry during that time. Because of that, they both lived.

I know very little about my father’s habits during his youth. I knew he spent a short time in jail, possibly because he protested the war. He was a philosopher, a poet, and a writer. He volunteered for our church and was deeply admired by his community. Unfortunately, the one thing he could not do well was keep a job.

Thus, my mom became the breadwinner, and she continued to be. She was the one who worried about money. She was the one who gave up her youth to go to work, to put food on the table, and did that even after we came to America in 1995. Both my parents took the bus early in the morning to go to work at a warehouse facility, packing food, often in freezing cold temperatures.

When I showed up to her apartment that day, she said, “There’s a local charity that gives out food every day from 9 am to 11 am. Let’s go!”

I was confused. “You want to go to a food pantry?” I asked.

“But don’t you have food already?” I said.

“Psshhh, if I can save money on food, why not?” she responded. “One of my friends told me about it. She said there’s a massive variety! You get everything, not just beans.”

I drove to the food pantry run by a local Christian organization. Sure enough, there were massive amounts of food. We came home with two enormous boxes that day. She took about one third of the food and insisted that I take the rest. “There’s more mouths to feed in your family,” she said.

The following week, she called me again. “Do you have time to take me to get food?”

It was early May by then, and for the past one and a half months, I’d been unemployed. I was laid off unexpectedly, but I didn’t tell her that.

Ever since she had surgery for her stomach cancer, she stopped driving, a task that she vehemently believes is part of her identity. When I was a teenager, she hired someone, a local Vietnamese man, to teach me how to drive. He was known to be tough but guaranteed that his students pass the test.

I failed even after spending several months with him. My mom became very frustrated with me.

“How can you waste my money?!” she exclaimed. “Driving is a privilege. You need to learn how to drive so you can go anywhere you want, whenever you want! You don’t have to rely on other people.”

My mother hates relying on other people for simple tasks, like driving. She’s always been incredibly independent and stubborn in her ways. When she got the cancer diagnosis and was told by doctors that she should stop driving, she was heartbroken. Then, when she began her chemotherapy and radiation treatment and began losing her hair and her appetite, she gave in and allowed others—her children and in-laws—to drive her around.

The chemo began in October and ended in April. Her tests came back negative for cancer, but positive for numbness. Driving was no longer an option.

Almost every week after that first time she called me to get some food, we’ve been going to the pantry. She had money on her EBT card, enough for one person to live simply, but she was getting lonely, she said. She wanted to get out of her apartment.

What she really wanted, I realized, was for me to translate her mail. Almost on a consistent rotation, she’d thrust a piece of her mail in my hands and asked me to tell her what it meant. Her English is sparse. She can only understand bits and pieces. Some of her mail were simply announcements or FYIs—things she should know, just in case. Hardly any of them were bills because she is on Medicare.

Sometimes, when I’m not translating her mail, we sit in silence as I drive. Looking at us now, you’d think that we have some kind of symbiotic relationship where I go to her for advice and she goes to me for help. That has not always been the case.

For most of my life, up until I had my first child, my mom and I did not get long. She was too much of an opposite, I thought. I didn’t quite understand her, neither did she understand me. We argued constantly. I couldn’t communicate how I felt about a lot of things, due to the fact that I only completed elementary school in Vietnam. Therefore, my understanding of the language, the speaking portion anyway, was rudimentary at best.

It wasn’t until we began to live together again after my daughter and son were born that our relationship slowly turned around. But it still wasn’t great. Earlier last year, there was no way I would have thought we would be waiting in line at a food pantry together, talking about life insurance or stories of our youth, or diving deep into anything personal, because that’s just not what my mother and I did.

Because I was laid off, I began to stay at home with my two children. The days when my husband is off are the days when I take my mom out to get food. Prior to the numbness test and pandemic, this never would have happened. She would not have relied on me to drive her around town, doing errands. I would have been reluctant to do it.

Our conversations have slowly evolved. My mother has slowly evolved. Prior to the pandemic, she’d criticize my lifestyle choices—how I chose to raise my children without religion, for example, or why I hadn’t baptized them yet. Her words stung and would put me on an emotional roller coaster, where I would sit in a self-deprecating pool of loathing and wonder what was wrong with me.

Now, when we are out together, I notice that she is different. She no longer criticizes my choices. Instead, she simply asks questions, such as “Can you look at my mail?” or about my kids. She adores them, and they adore her as well.

Sometimes we talk about deep subjects, like loneliness. She feels the lack of social interaction enforced for all the residents at her complex is detrimental to her mental health. I have to agree. A few times a week, I bring my children over to see her, but recently, they discovered what we were doing and posted a threatening letter on her door saying she violated the rule—that one should not have people over that often, especially in an elevator together.

It’s a challenge to figure out other ways to connect. We have FaceTime, but it’s not the same.

I know she doesn’t have much longer, even less if the cancer comes back. But in the meantime, while she’s cancer-free and we have this time together, this is what I will continue to read her mail when she asks, I will bring her to the food pantry when she calls.