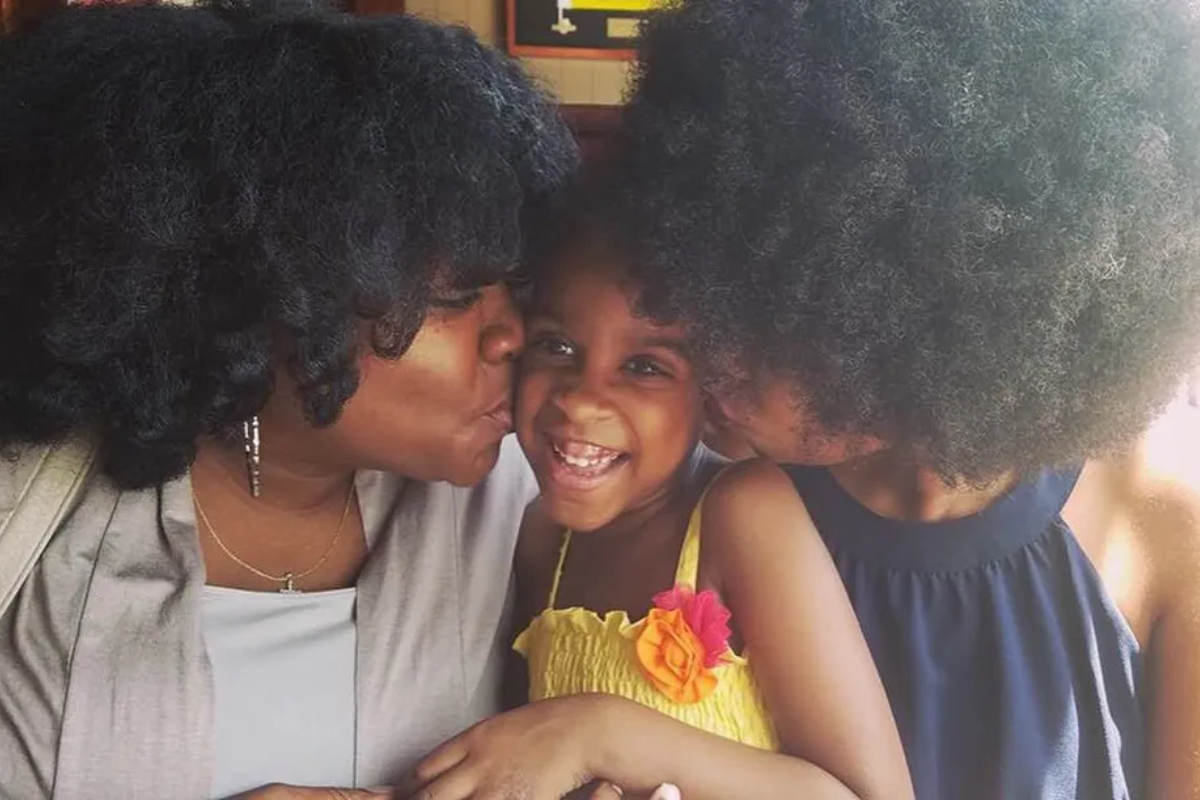 I’ve known of Stacia’s writing for quite some time and the first thing that drew me to her was how familiar she felt to me. It was as if I had known her much longer than the first time I spent any amount of time reading her words. She’s the kind of writer that makes me wish I could write better when I read her work. Those are the kind of writers to keep in your back pocket.

Yet, it is Stacia’s motherhood that drew me closer. I love how she talks about her daughter and their relationship and her dreams for her. So, it surprised me when I asked her about parenting that she responded with, “I don’t always feel like a mother. I’m very uncertain most of the time.” While I was shocked to hear her say that, it still felt familiar to me and I admitted to her that I felt the same even though I have been a mother longer than I’ve been married, had a career, or lived without braces on my teeth. Women often identify so strongly with being a mother that we can push out the rest of our selves until we become almost unrecognizable to ourselves. It’s a great paradox and quite complicated to discuss.

As she and I sat and talked on the phone one day about topics, flitting from one to the next like a butterfly moves around finding a place to land, we discovered much about each other and I, for one, kept discovering things about myself as she spoke.

I asked about the makeup of her family and about what it’s like to consider yourself a single mother. Stacia told me she lives in a four-generation household with her mother, grandmother, and her own daughter. “I’m very used to that dynamic. If I lived alone, I know my daughter would be a different person,” she told me. Having all that influence from other women is such a natural part of her parenting that she rarely thinks of alternative household structures.

“Do you consider yourself a single mother?” I asked her.

“People take umbrage, you know, about that phrase ‘single mother.’ I feel like there are gradations of single parenting,” she responded.

“Yes,” I told her. “If you have a partner who takes over any of it but you’re left to take care of the bulk I prefer them to say they are solo parenting.” Single mother, as an identifier, assumes that 90% or more of the parenting is done by just a mom. Even in my first marriage where my partner was gone quite a bit for work I felt like I was constantly undoing things he’d come home on the weekends and mess up with the kids.

Stacia agreed with that and added that mothers bear the brunt of emotional management of parenting. “I hope I’m doing it ok.” As far as how she’s helping her daughter become a good person she knows that they’re very different in social situations and Stacia told me, “I’m trying to let her teach me how to support her in social situations.” We moms don’t always know when to step in and rescue our children especially if we struggle with things that they seem to be mastering quickly. If you’re an introverted person and have an extroverted child, it can be terribly uncomfortable watching them do things that you’d never attempt.

Conversation took another interesting, complicated turn when we started discussing our relationships (or lack thereof) with the fathers of our children. At 15, I raised a daughter entirely by myself save the support of my family. When he came into her life, by my daughter’s prodding, 16 years later, it was very tough for me. Stacia, who co-parented long-distance until her daughter turned three, with her co-parent living in California and her and their daughter living first in Michigan and then Maryland, agreed. “It’s hard if they’re announcing themselves as The Father and wanting to stake an immediate, firm claim in the way you parent and live. This child has been growing and developing this whole time…” she started to say. There was no need to finish her sentence.

Kelly Wickham Hurst has lived at least three lives — and they’re the kinds of lives a writer covets: rife with life-changing experience, triumph over adversity, passion, conviction, and conflict. This is what I think as I listen to her breeze through a gorgeous self-narrative about becoming a mom at 15, placing a second daughter for adoption while still a teen, marrying and having sons, divorcing and raising her son’s with minimal assurance from her ex, advancing her education, becoming an educator, writer, and student advocate, and finding the love of her life — a man she called The Cuban on Facebook in the run-up to their wedding last year.

I quietly envy moms whose children are already grown and who, while still in a glowing prime-of-life, can enjoy reclaiming their personal time for professional enrichment, romance, travel — pretty much anything we want.

“We have this tiny apartment,” Kelly says of her love nest with her husband (in total, they have 6 children). “Here’s what we tell people: ‘The kids wouldn’t move out, so we did.” She laughs. The apartment she and her husband share is close to his job, an hour from the home they own. “We go home on the weeks and whoever’s there is there!” Kelly’s dad, who’s 80, also lives in the house. And Kelly and her husband also help “parent” one of her former students, Carlos, who lives with an uncle but spends a great deal of time with her big, happy, blended family.

I asked Kelly about what it’s like to have the freedom to date as a parent, something I haven’t fully explored, in part because my daughter’s only 6 and also because I worry that it may upset the delicate balance I’m maintaining with my co-parent at present. She told me that, when she started dating her current husband, she kept the relationship a secret for a while. “I wanted it to be a private thing. I wanted it to be mine.” She agreed that it can be tough to manage not just the interactions between yourself and your significant other but also, your significant other’s relationships with your kids and their father, if he’s involved.

She says taking that private time in the beginning proved best for all involved. “I didn’t want to complicate my relationship with my children, with another man.”

Hearing her talk about her family — her four children, her husband’s two, and her elderly dad — it’s no wonder Carlos, her former student, wanted to spend so much time with them. As an only child, I love hearing about and being near large families. Having no siblings means my daughter has no aunts, uncles, or first cousins on my side of the family (she has two uncles and some much older first cousins on her dad’s side). Houses noisy with laughter and love are a gift — and Kelly is well aware of her great fortune. I can hear that gratitude in the loving tone she uses to describe them all and the laughter that springs up freely in her conversation about them.

But when she recalls her earliest years as a mother, she admits that it was a very difficult time. “I have felt like a mother for such a long time that I don’t know what it feels like to not be one. I’ve been a mother for 30 years now. My daughter just turned 30. I’m 45.”

I asked her when she felt like she was at her most motherly. When did she feel like she was fully performing that role? “I feel my most motherly when I’m being decisive,” she said after giving it some thought. Because she became a mother so young (She conceived at 14 and gave birth just one month after turning 15), she says she often had to fight to be seen as a mother, so projecting decisiveness and confidence helped. But it didn’t alleviate the emotional tension she felt.

“It was all work and I felt very resentful of that work — but [my daughter] never knew it.” Kelly says it was important to her that her firstborn stayed a child for as long as possible. She even tried to talk her out of getting a job at 16. “Being sixteen is hard!” she laughed. “I grew up very quickly and I didn’t want to. But I also know that I missed out on a childhood that I can’t blame anybody for but myself, and I tried very hard to give her a childhood for the longest time.”

Adoption also proved to be a challenging experience to navigate. She and her second daughter’s adoptive parents agreed to an open adoption, but there was a long period during her birth daughter’s childhood when communication between them lapsed. She says they exchanged pictures and letters until her birth daughter was 10, then fell out of touch until she was 21. “I got married and had more children. Her parents got married and had more children. […] My career was taking over and I had three children under the age of ten. I was busy. Part of me thought that her parents probably wanted freedom and space from me as well.”

Her birth daughter found her on Facebook when she turned 21 seven years ago. “Once she met the other children [and her aunts, uncles, and extended family], it was like she was never gone. She fit right in.” She says her other three children were participants in her birth daughter’s wedding. Kelly’s description of their relationship as a family now is one of the more beautiful stories about adoption I’ve heard.

Now, in addition to basking in the spring of a new marriage and enjoying the fact that all of her children are grown — “I haven’t done, like, formal parenting in a really long time. My youngest is 21. All my kids can drink with me,” she laughs. — Kelly will soon be grandmothering; her daughter is due with her first child. She’s also starting an entirely new chapter of her professional life, as the founder of a new education advocacy initiative called Being Black in School, which seeks to ensure safe spaces for Black students in education spaces.

Dynamism comes at a price. For Kelly Wickham Hurst, that price has been high. But I could listen to her talk all day about all of the beautiful dividends that price has yielded.