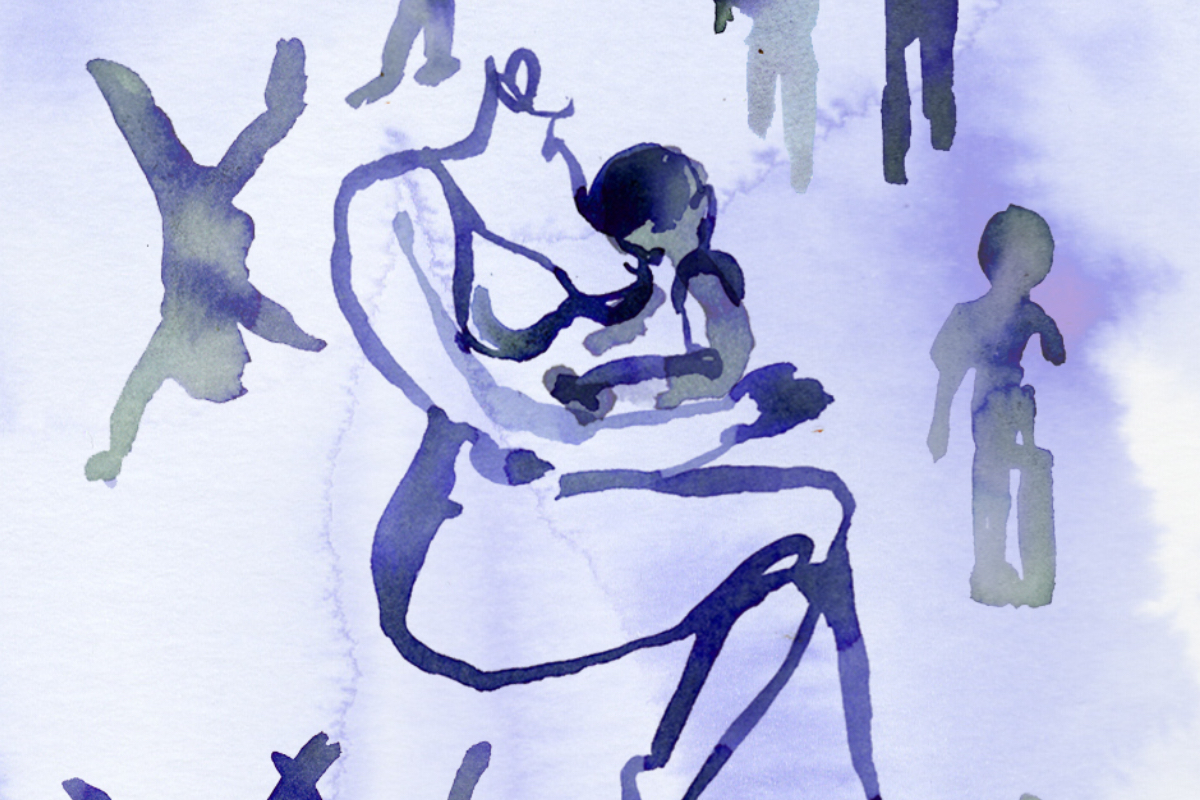 ​​I was thirty-five years old, lying on a somewhat faded ocean themed duvet breastfeeding my four-month-old son Arthur, during a moment of retreat from my seven other children.Bursting through the door were two of my sons fighting with train track pieces that they had turned into swords. My four-year-old son Isaiah shouted, “Mom . . . .  MOM . . . . MOM! Dominic is trying to hurt ME!!!” Dominic was eight and the creator of many pirate fighting and dragon wars games. He’s creative and loving, but often the one who begins many wrestling matches in the house.

​Baby Arthur continued to nurse quietly and close his eyes even though Isaiah had found his place on the bed next to us. I begged Dominic to calm down, but he leaped off my desk swivel chair at the foot of the bed and dashed towards me. “Mom, it isn’t my fault,” he said.

​“I don’t care if it wasn’t your fault,” I said, “Please find a way to work this out. Arthur is almost asleep.”

​My mommy negotiating skills were worn out. I wished the whole house was as quiet as it was in the living room where the rest of my kids (Joel age twelve, Ellianna age eleven, Charis age seven, Bria age six, and Levi age one and a half) were supposed to be watching TV.

​I think that being adopted might have contributed to my desire to have a lot of kids.

​My younger brother Sam and I were adopted from two different countries when we were both less than two months old. I was born in Dhaka, Bangladesh, and Sam was born in Katmandu, Nepal. During the years we were adopted, my father worked for Save the Children in each country, making the adoption process much easier. Despite the fact that my British parents experienced each of our native countries, my family life did not reflect our backgrounds beyond skin color, my mom’s old saris, some dolls my father gave me, a black wooden rocking horse covered in colorful designs, and some curries my mother had mostly learned how to cook when she’d lived in London. I was ethnically Bengali, but culturally British–American. We lived in the white suburbs of New Jersey.

​When I was in the seventh grade, there was a guy that I liked. His hair was dark brown, almost black, and he had olive skin. I think I liked him because, in a sea of fair blondes, he looked the most like me. Unfortunately, that guy did not feel the same. Soon after he found out about my crush from a mutual friend, she told me why I shouldn’t bother liking him because he’d called me names.

​“Oreo cookies!” he called me. But, he had no clue what he was talking about, right?Weren’t Oreo cookies dark on the outside? My family was the opposite. My white, British parents would be on the outside of the equation and Sam and I would be brown filling. Not just one shade, but chocolate and latte. Now that sounded like a yummy cookie, even if it was an outrageous insult.

​Comments about my skin were not only spoken by people who knew me. Strangers often pointed out my color as if I was invisible. “Did you see that girl, she’s black,” I overheard a girl in the bathroom stall at the mall say to her mother. The way she said it, Black came across as a curse word. Apparently, in West Milford, NJ, there were only two categories of people: black and white. There was one major problem with placing me in the black category; I’m not from Africa. By categorizing me as black, I fell into a group of oppressed people who were forced into the country, not as humans, but as slaves. My place in the world was outside of this experience.

​My mother gave me a box of dress-up clothing when I was seven that consisted of 1960’s clothes from her youth. There was a blouse that tied in the front exposing one’s stomach, but because I was a kid, it just seemed like a normal top with crazy long flared sleeves. She’d also made a lot of her things. I rolled up cotton batik skirts around my waist to make them look the way that I’d seen them on her in a few photographs.

​When my mother was an older, single woman living in London, fashion was a priority. She liked shoes, but couldn’t wear high heels anymore. I still thought every fancy sandal and pump was elegant. She had a whole section in the closet devoted to silk scarves and two jewelry boxes filled with pretty gold, silver, and colorful things. Before piercing my ears, I would go through all of her clip-on earrings. I spent hours imagining a day when I could be just as stylish wearing earrings shaped like bright yellow flowers or red dots.​

​I always imagined there’d be a day when we’d share clothing. I’d wear her black dress shoes to a high school dance, or maybe she’d have a blouse that would go perfectly with a pair of dress pants for one of my first work interviews. Mom was around five foot six and a size eight or ten. By the time I left high school, I was four foot eleven, the shortest in my entire class of over three hundred people, and a size one. Our bodies were clearly going to be different. Instead of shoes and blouses, I borrowed necklaces and scarfs.

​I never expected to fill my closet with only three fancy dresses, maternity clothing, and piles of stretched out tee-shirts. The only jewelry I owned, besides my wedding and engagement rings, were things my father had bought me when I was younger. I owned three pairs of shoes. I was a mother of eight children and a focus on elegance no longer made sense.

​When I was twenty-seven years old, there were some articles of clothing in sizes one and two that I couldn’t give away even though everything that reminded me of my college days went to the thrift store after baby number three. Stacks of bright colored spaghetti strapped tank tops and short shorts had to go, but I couldn’t part with classic clothes like fitted teeshirts, cardigans, and jeans.

​My oldest daughter Ellianna was eleven when I began to consider giving her my clothing from before I had babies. We opened a blue plastic tub, and her eyes got big. She pulled out three shirts that looked about her size.  “Ellie, do you like this green t–shirt?” I asked. It was more than a basic piece of clothing because there were small olive-colored buttons across one shoulder.

​She wasn’t quite my height, but I was almost positive she’d be taller than me soon. Ourfeet were about the same size. When she grew out of her last pair of sneakers, we began sharing a pair of blue canvas ones.  “Go try it on,” I said. She went off to another room to change and came back looking like a younger version of myself. Her hair was the same length that mine was when I first got married. Even the way each strand of thick black hair framed her face was similar because she inherited a double crown (where there are two swirls of hair on the top of her head instead of just one) like me.

​My six-year-old daughter Bria made a crashing noise on her way into the room.

​“Can I have that shirt when I am Ellie’s size,” Bria asked.

I began to picture all my children, my three daughters and five sons. Their life was completely different from mine. Their dad is white with blonde hair. People always told me that my children look more like me. They have my brown Bengali coloring, but my husband’s exact brow line, his foot shape, and one of my daughters looks just like a brown version of his cousin’s kid.

​Sometimes, I think that maybe if I have enough children, I might be able to piece together a puzzle of my history. There have to be things like my six-year-old daughter’s curly hair that could come from my gene pool. One of them, like my oldest daughter who is eleven, could look like the replica of my birth mother. I won’t ever have the answers to these questions.

​I have this brood that crashes through doors, and it is never quiet in my home. “Mom, how does a camera work,” my oldest son Joel asks. “I want to wear this scarf because it’s my own kind of fashion,” Ellie says. “When I grow up, I want to be a pirate,” Dominic says. “Mom, please have a girl baby,” Charis says. “Don’t comb my hair because it’s curly,” Bria says. “I don’t want to share my room with the baby,” Isaiah says. “Cake,” Levi says. “Gah,” Arthur says.

​All of them are my relatives. They are the first blood relatives I have ever known.