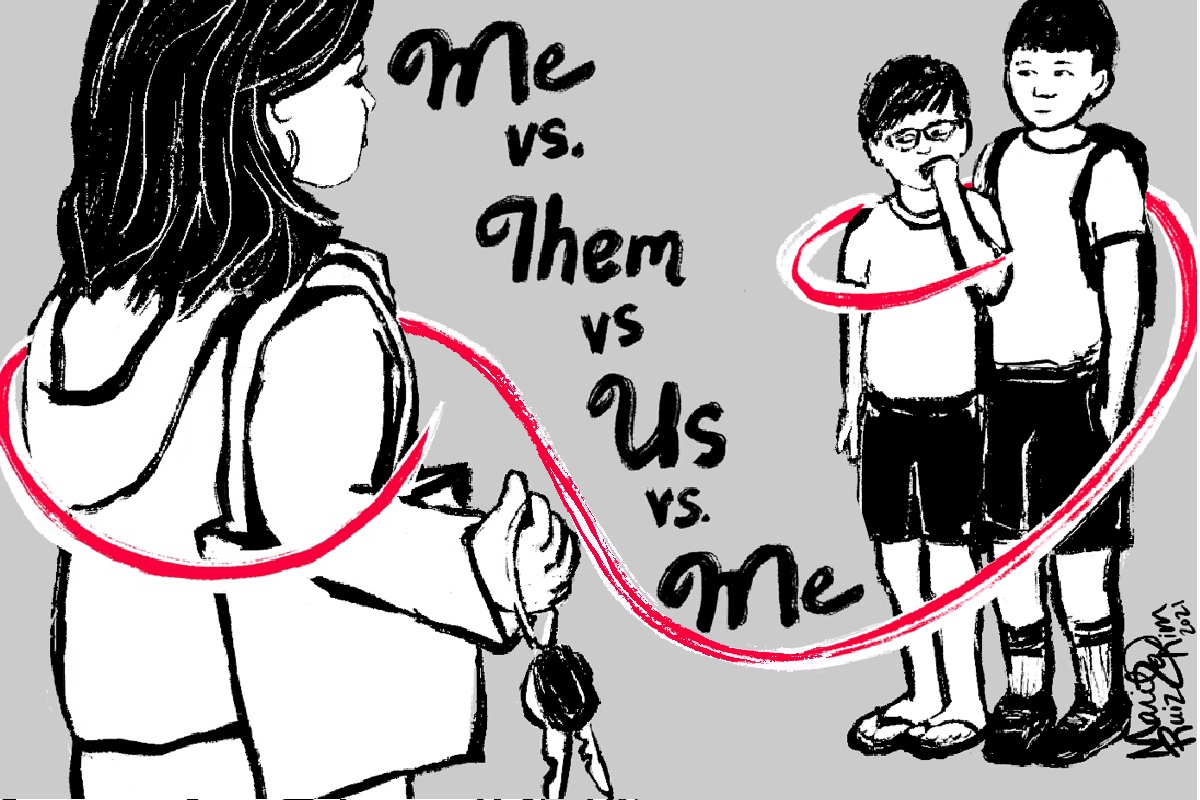 I thought when my first baby left my body and I looked him in the eyes, I’d feel this overwhelming oneness with him—this baby made out of ingredients of me, his muscles loose and fragile, dependent on me to stay alive. I felt so weak and so powerful at the same time. I held him; he didn’t know how to hold on. I looked at him; he didn’t even know what it was to see. I did not feel oneness. I felt separate.

By the time he was a few months old, it’s like I could see his future Person behind those clear dark eyes, waiting to be fully realized, like he already knew who he was but couldn’t tell me yet.

When I met my second son, he had more ease with being a baby in our family equation. His attachment suited me just fine. He was small enough to not have much of an opinion, and anyway, he was happy to go wherever, as long as I would be there too. And I wanted to do lots of things.

I re-started my art studio practice as soon as I had a couple days a week where my older child’s preschool hours matched the littler one’s nap time. Making art felt like pushing myself up and out of dark water, touching my lips to oxygen, and filling my lungs before surrendering again to the inevitable waves. I loved any minute of independence. I felt a little guilty about it… but… I also didn’t.

I kept observing myself in relation to my kids. There they were at three and newborn; there, seven and four; suddenly, nine and six. There I was, being their mother. Being an artist. Wanting to be taken seriously: by “the art world,” by my kids, by myself. I wanted to be my own person again.

I don’t remember why, but in Fall of 2013 I took my oldest son from our home in California to New York City just the two of us. He was in fifth grade. Even though I didn’t set foot in that big city myself until I was 18, I expected my quiet son to behave as confidently as he did at home. But he clung to me. For some reason, I thought we’d walk side by side as almost equals: equally curious and equally capable. But the buildings intimidated him, and he sidled up next to me, grabbing my hand as we walked down sidewalks, through museums, up subway staircases. I kept trying to let go. I look back at it now, and I wish I’d seen him for the ten year old that he was: a small boy dropped into a city that overshadowed him.

The following spring, I moved my art studio from home to Oakland. I thought my kids’ intermediate school years would allow me to work at my work (art) while they worked at theirs (school). I wanted independence—definitely for me, but for them, too—for all of our benefit. I expected to have more freedom than I’d had in a decade.

My older son adjusted easily to middle school life, and I expected my younger boisterous one to embrace boyhood just as he’d embraced being a baby, back when he’d go anywhere and do anything with me. But he couldn’t find equilibrium now that his brother was at a different school. His anxieties expanded to fill our house. He was scared, all the time.  He couldn’t explain what it was about school that had become unbearable for him. His stories about interactions with students were troubling at first, then improbable as details got mixed up then fuzzy. I needed to be near him to grab hold of his hand and lead him out of the confusion. I still paid for my studio in Oakland, but I stopped going. He simply couldn’t get through a day without me right by his side. My love for him compelled me to make good on the promise that I’d give up anything to be there for my kids.

It turned out he needed more than my love to guide him. He couldn’t do regular school at all anymore. We had to find a solution. A consult with his doctor surprised us, when she pointed us to getting this energetic, talkative, hilarious kid assessed for ASD. The result was Yes, he has autism*. After five months of something that’s better described as homeNOTschooling, he was referred to a specialized public school program. The very day I dropped him off, I went searching for a new studio, closer to home, and found myself again.

Then came March 2020. I had to close my studio; Covid sent us all home to stay. Finding independence as an artist became an epic, losing battle.

Which is what made a simple afternoon this Fall 2020 so notable. My younger son, now 14, decided to go on a long walk. By himself. He wanted to leave the house, leave me, BY HIMSELF. My heart skipped a beat. I tried not to let him see my eyes widening. Sure! I said. (Are you sure? I thought). It didn’t fit with my picture of how I, a mother accustomed to celebrating sudden free time, related with my kids. I helped him gather what he might need and went with him to the front door. I watched as he walked away.

It was the first time I felt the truth of Elizabeth Stone’s words that having children is to “have your heart go walking around outside your body.” I’ve always been so acutely aware of myself and them as individuals, and I’ve seen them as their future selves wanting to be as independent as I always wanted to be. I distinctly remember loving those preteen bike rides and those nights out with my high school friends. I wanted that for them, too. My connection to them always existed in the whole context of their future, and mine. But there my 14 year old went, walking away. And there was my heart, walking with him.

My kids have always been the primary aspiration of my life. If I had to choose, I would choose them. But in spite of what a graduate art professor once told me, I do not have to choose, at least not between them and my art. I want to be me, I want them to be them, the best of who they are, the best of who I am. But we do this together. We aren’t independent of each other; we don’t have to be lost in each other either. I love who I am because of them.

Writing this essay, finishing it, right now: my oldest son is on my left, using me as pillow while he watches football. My younger son is to my right, his headphones in and listening to YouTube or who knows what. And here I am writing, completing my art. And that’s something.

Identity-first language is preferred by many autistic people, but my son prefers to use the people-first version to describe himself, i.e. “has autism” rather than “is autistic.” My use reflects his preference. As for me, I have ADHD and depression… so I guess he and I have a similar approach to how we phrase these things. In any case, we celebrate neurodiversity in all its forms.