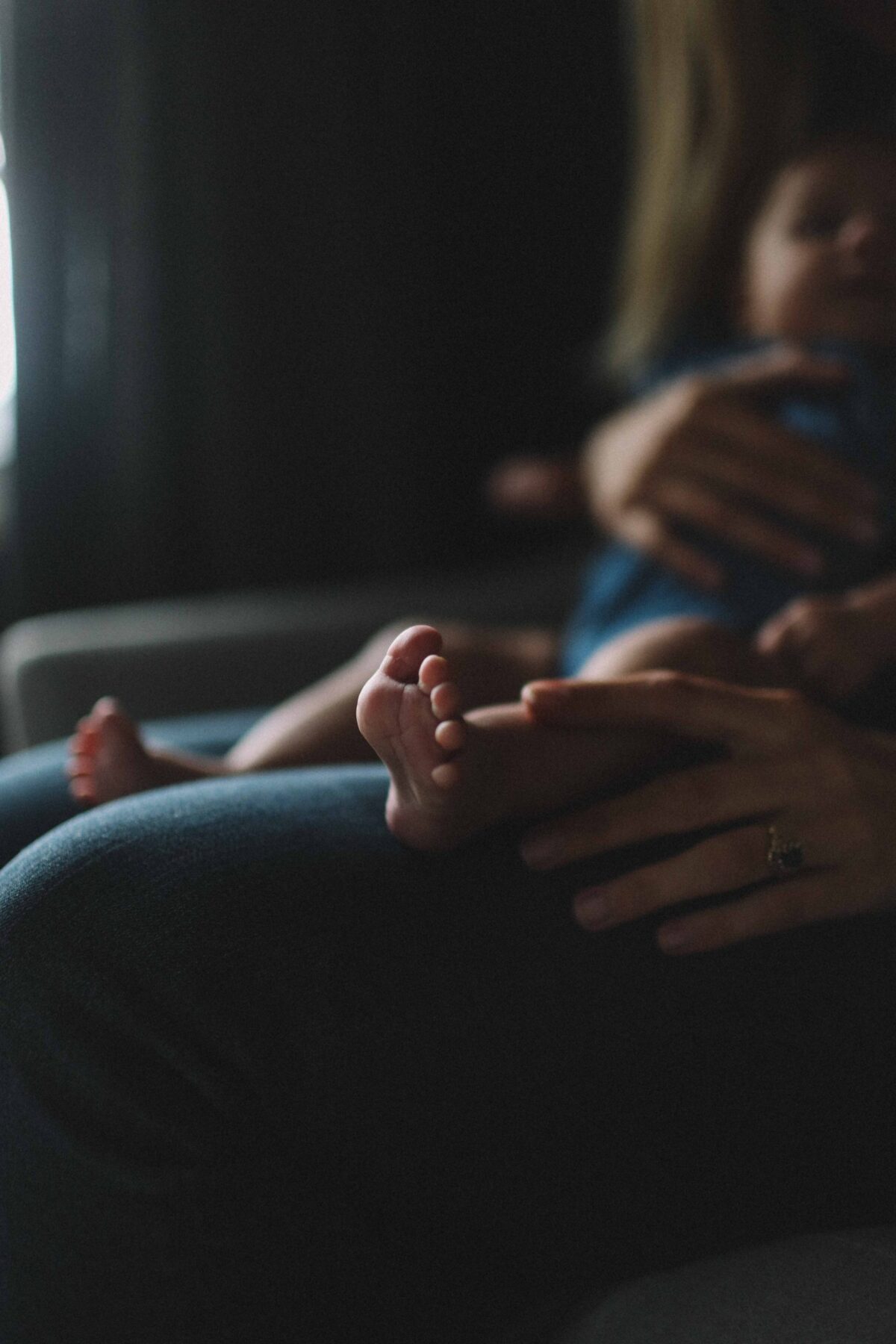 “What’s on your mind today, Carletta?”

I don’t tell her my children. Their faces, the first thing I used to see each morning, whining about being hungry. The sound of their voices calling my name, Mama, over and over again. And their laughter filling up what used to be our home. I miss that.

Them and having a home.

“Nothing really.” I say, instead.

It’s hard to keep a straight face with this lady. It’s like I’m being interrogated. The same old thing, every week. Her sitting across from me in that wooden chair, the seat padded with floral. And me on this ugly brown couch, with my arms crossed, ready for the session to be over.

I shift in my seat, trying not to look or seem as annoyed as I actually am.

“How was your visit with your family yesterday?” She says, kind of glancing at me over her glasses.

Here she go trying to play this little game again. She knows good and damn well those people, whoever they are, ain’t no family of mine.

“Some folks visited me yesterday pretendin’ to be my mama and my children. The visit was fine. I just go with the flow at this point.” I say.

“You don’t believe the people who visited you yesterday are your family?”

I’m getting annoyed at her audacity. It’s been like this every week since I been here. The same old questions. About these damn strangers. When she know well as I do my mama been dead and my kids have been taken. And they made it so I can’t remember when and where they took them.

“They not. Those kids look damn near grown. And that woman, she kind of favor my mama. I mean they got the same color eyes, but…my mama been dead for years. So I don’t know who that is.”

“Do you remember how old you are, Carletta?”

My body gets warm like it does when a rage is brewing inside of it. I want to scream, but I don’t. I’m not gon’ let these folks drive me crazy.

“I know exactly how old I am. Thirty-two years old. What you askin’ me that for?”

“Well. You said the children who visited you yesterday were too old to be yours. How old were you when you had them?”

“That’s none of your business. And another thing, you people are really sick. You really are.”

“I know you are frustrated, but I would like us to reach an understanding about your family. Can we move forward with our session?”

“No. I’m ready to go ‘cause you bout to work my last nerves.” I say, fighting back the urge to knock her out of that chair.

“Okay. We can end our session early today and pick back up next week. How does that sound?” She says, sounding a little more defeated than usual.

I leave her office, walking quickly down the long, narrow hallway that makes me feel like the walls are closing in on me. My assigned room has a mini-couch and twin bed with a tv hanging from the ceiling. There are sunflowers sitting in my window. Those people bring me fresh ones every week when they visit me.  I sit on my bed, exhale, and stare out the window. My eyes burn hot with tears and the grief stabs me in the stomach, an unbearable pain. I keep retracing my memories trying to pinpoint when it happened.  When my life broke up into a million little pieces that I can’t figure out how to put back together.

I know all of this is some scheme to break up my family. To make me forget I ever had one. Except I got a picture of the five of us together–me, my three boys, and my baby girl standing in our front yard. We were all dressed up in our Sunday finest. And my baby girl had on her favorite little yellow lace dress. I keep this picture hid away in my bible–Psalm 23–so they don’t know I got it.

So I can remember.

So I can remember the part of my life they keep tryin’ to take from me.

Jeremiah Kyrie. That’s what I name my baby boy in my head before I even say it out loud. And before I could fix my mouth to tell them I had decided on his name, a white woman comes in and places her hand lightly on my forearm.

“Sweetie, I’m gonna take him on down to the nursery so you can get some rest.” She said with a smile that seemed honest.

And so I believed her.

That she was gonna take my baby down to the nursery.

Her face was softer, not stiff and unmoved like the other white women nurses. So I figured she’d do right by me and my baby.

I don’t remember much of what happened after they told me my baby was gone. But I do remember saying,

“What you mean gone?” And I could feel the inside of my chest turning to ice right before I start screaming about the white bitch that took my baby. So I reckon they must’ve knocked me out with something ‘cause I probably got to screaming and threatening to whoop ass.

I woke up, still in the hospital with my sister, Sue, standing over me. And she rubbing my head saying,

“We gon’ get through this.”

And she say, “They say he dead. Say he came out dead.”

And my heart hurt so bad I think it might just give out.

Sue looked at me with sad eyes, trying her best to hold the wetness forming in them. Her mouth was slightly open, but nothing came out. She just looked at me with those eyes and let me ramble and cry and scream and wouldn’t let them dope me up when I got so loud they could hear me down at the nurse’s station.

After a while she apologized for not being at the hospital to protect me. And I tell her between fits of tears that it ain’t her fault it’s them. And we just weep for my baby boy together til the hospital staff get tired of all the commotion and discharge me.

I never went to I.D. the body ‘cause I knew my boy was still alive and they had took him. And I didn’t want to imagine what they did with him. I refused to. But I did know for certain he wasn’t dead ‘cause killing black baby boys is just like throwing away money to them.

And I reckon they think I’ll forget my baby. But the image of his face, peach-stained and eyes too new to open, won’t leave me.

Because I’m his mama.

I won’t ever forget.

“Let me tell you what they used to do back during slavery,” Grandma Lou said while she cut greens for supper.

“Learned this straight from my own mama. They separated the mamas from the babies. And that’s how come everything so fucked up now.”

“Your mama was a slave, Grandma Lou?” I ask ‘cause I figured that’s the only way she could of known about what was going on during slavery times since Grandma Lou always talking about her mama only making it to the fifth grade.

Grandma Lou gives me that look like when she’s ‘bout to throw her shoe at me and La’Daniel when we get to hittin’ back and forth.

“They ain’t teachin’ ya’ll shit at that school house, is they?” She says, shaking her head and laughing.

“Well, how she know then ‘bout what happened way back then?”

Grandma Lou cut her eyes at me before getting up to throw her greens in the pot.  La’Daniel was sitting next me, stuffing his mouth with some watermelon she had cut up for us.

“So either way somebody Mama was a slave then for it to get passed down. But how come they was takin’ the kids?”

“Don’t get cute.” Grandma Lou says before finishing the story, even though I wasn’t being cute, I was just sayin’.

“That’s how they kept control. You a slave and having the nerve to love something, the thing you done created in your own body. That’s too much power to them. They take the babies from the Mama ‘fore they can even learn to love ‘em.”

“Dang. Where the daddies was?” La’Daniel says, surprising me ‘cause I didn’t realize he was even paying attention.

“The daddies was in the fields. And they couldn’t do nothing no way, but take it.”

“That’s real sad, Grandma Lou,” La’Daniel said with a pitiful look on his face that only brought more attention to his eyes, slightly droopy like Mama’s.

“It was sad. But that’s how it was back then. Still like that really. They just figured out new ways to do it.” Grandma Lou said, her usually relaxed face twisting into a frown.

“Okay Grandma Lou, but what this got to do with us?” I say, cause I’m trying to see the whole point since this started with me asking how come Mama left us again.

“Chile, this world ain’t never did right by black folks, especially the women. And I did what I could, but the world got to your mama first. I’ll just say that. But one thing about it, it ain’t make it so she don’t love ya’ll cause she do. Don’t ever think she don’t.” Grandma Lou says, trying to convince me, like always, that Mama loves us. But more like making excuses for her, I think.

“Well if she love us how come she keep dropping us off here all the time? That sound like love to you La’Daniel?” I say, looking over at La’Daniel who quickly looks away and down at his bowl of watermelon. She can do no wrong in his eyes, even when it’s right there. He just too young to understand real life.

“Let me tell you something. I know your mama ain’t done right by ya’ll and I can’t tell you how to feel, but I know one thing, this the best thing she could of done for you. ‘Cause if I didn’t have you, the state would. And that’s just the fact of the matter. No matter what happens I’m gonna keep ya’ll together as long as I got breath my body. And she know that. That’s why ya’ll here.” Grandma Lou says without blinking, and for a second I think she might hit me for sassin’ her about Mama. But she don’t. She kind of smiles at me in that way when you feel sorry for somebody.

“Okay, I guess.” I say, feeling the bottom of my stomach tense up.

Grandma Lou took a deep sigh, before sitting back down at the table with us. She clasped her hands together in front of her and just looked at us for a few seconds.

“Listen. She gon’ do right one of these days. Right now, she trying to save herself. Ya’ll too young to understand what that is. So just pray for her, and never stop loving her. That’s your mama. And can’t nothing change that.”

I know the conversation is over once Grandma Lou gets up again and walks over to the cabinet to get our plates for supper.  I decide to let it go for now. Maybe there is some things I don’t know. But all this sounds like her choosing. Choosing the same thing over and over again. And whatever that is, it don’t include us.