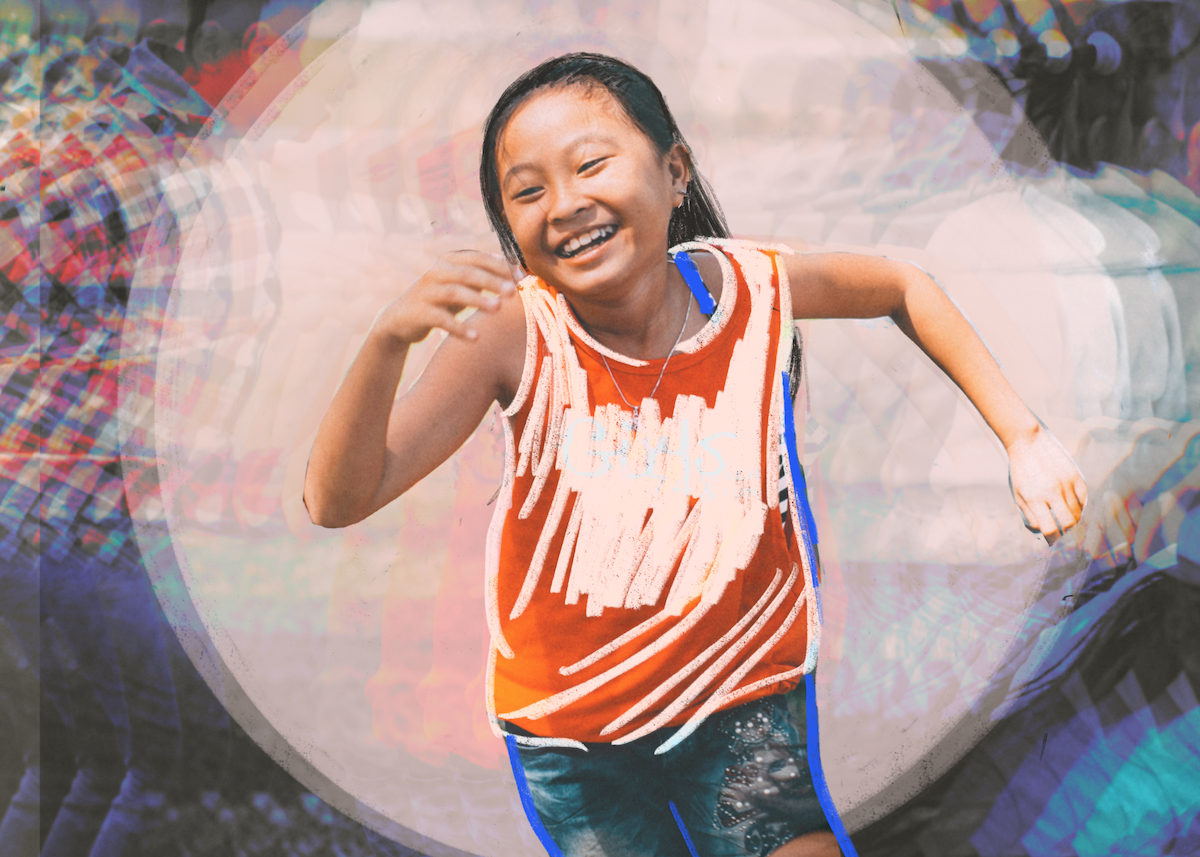 My daughter and son are running around the house in their usual post-meal frenzy, throwing toys in the air and jumping off our couch. They run to their room, grab a scarf from my daughter’s drawer while yelling lâches at each other, a term they learned from their French father, which means to let go. They like to play this game to see who lets go first before falling to the floor.

My instinct is to stop them. Some days I’ll notice the smiles on their faces, hear their mouths full of glee that break into laughter rolling from the depths of their bellies. But today, my initial reaction is one of anger. Today I haven’t had a chance to write. Today I haven’t finished my cup of coffee or showered. Today I am running on 4 hours of sleep and the noise is a clock tower bell ringing over my head. I feel the warmth emanating from the end of my throat, the clenching of my jaw as I form fists with my hands and I yell – “STOP! STOP! STOP!”

Their joy dissipates into sadness. I try hard not to yell most days, so they both stand there in shock. It becomes very quiet, as I am immediately filled with guilt for exploding.

I was a happy, hyper kid, always moving and excited about everything. Mischievous, but alert and aware. Once, Mami found me on the windowsill of our apartment and, halfway to a heart attack, snatched me off of it while I beamed proudly. Thankfully, the window was closed. I broke my arm while jumping on a bed with my cousins when I was two, the how of which is still a little murky. Many times I hung outside of our apartment in Queens with friends and came home with bruises and cuts, to the distress of my parents.

As a child, my parents tried to curb my mischief, and my younger sister’s, by threatening us with the belt. Dad would grab his leather belt, loop it around his hands and snap it open and closed in front of us. I imagined an alligator snapping its mouth shut, the sound of which was enough to get us to calm down and behave. Other times they resorted to yelling at us and at each other. Both our parents are from Peru, raised in religious environments where respect was absolute and children were to be seen, not heard. But even so, they were often at odds on raising us. Mami was more tender and lenient, letting us get away with things, whereas Dad was more stoic and strict.

During my teenage years, we relocated to a house on Long Island and still, I remained the more challenging daughter. I was studious yet stayed out late, engaging with people and in acts much more mature than I was at the time. Often, they resorted to what they knew best, Mami praying, Daddy silent, and closed off.

Dad is the quiet one, but also explosive. If my behavior set him off, it could be attributable to a change in routine, the noise level, a remark from Mami. At times he was a ticking time bomb, leading to many arguments between the two of them. I remember wishing I could tell Dad to stop yelling, to soften his words, but I was always too scared of his reaction. As I got older, I started to identify these outbursts in myself, and it’s this correlation that led me to work on regulating them, to understand my mind in all its vulnerability.

With my fists slowly unfurling and raised eyebrows lowering, I look at my daughter who has a scowl on her face and her arms on her hips. She says, “Stop screaming!” with all the courage I wish I’d had when I was younger. Tears fill my eyes as my body relaxes from fight mode into its natural response when big emotions overtake me and I say, “You’re right.” Vulnerability is allowing my children to see me cry, telling them I’m sorry when I yell. Allowing them to call me out on it without viewing it as an act of disrespect but as a reminder to remain tender.

It takes a few moments before both my daughter and son come to me and we apologize to each other. I tell them I’ve had a hard day, I tell them I’m working on having better days.  It took a long time to feel comfortable with them seeing me exposed in this way, but I decided early on as a parent to change my family’s narrative. When I was pregnant, I armed myself with books on emotional intelligence, on parenting and raising strong-willed children. I watched my husband crack open the first time he held our daughter and later our son, with every emotion overflowing. We might not still hold them in this same way, but I think we both keep in mind that they were once fragile, motivating us to be gentle.

My husband and I want to be guides for our children’s lives. This has meant more open conversations with them, letting them speak their opinions so they know they are heard. It means taking a breath before immediately thinking that we are right and they are wrong. It means contending with other parents, my own included, who tell us to be more firm so that our kids don’t get out of hand and we can control them.

I want to be clear that being tender does not mean we allow our children to do as they please. We have boundaries that we uphold, expectations and rules they know they have to abide. But we are also aware that they will often stretch and pull those boundaries. If they do step out of line, we want to be able to discuss the situation without the full force of our judgment. They will know right from wrong, but they will also know that we love them no matter what.

Despite it all, Mami somehow always seemed to have the sun in her palms, looking on the positive side of things, even on the bleakest days. I learned tenderness from her first, in the way she nurtured our family, cooking and cleaning and working outside of the home. Energy constantly seeped from her fingertips. Mami has always been eager to lend a hand or an ear, prompting the surliest of us into a good conversation. I have seen her fight and I have seen her break down and cry, unafraid to be vulnerable in front of her children. She has always been overt in the ways she loves us.

When I think of Dad, I can’t help but also remember the ways in which he has allowed himself to be tender. I remember listening to him in his bedroom calmly strumming his guitar, singing a song so softly only he could decipher the words. There were times he attempted to cook spaghetti bolognese while Mami was visiting family in Peru, and how even when we dislike doing something the act of doing it for people we love is a brave undertaking on its own. When we lived with my parents for a year, Dad would spend time drawing colorful pictures with my then-toddler daughter, because he is an artist in his own right and although I don’t remember sharing in this part of him, I cherish that he allows her to see him in this light. I also think about how he is not as soft around my son, which is not to say he loves him any less, but perhaps speaks more to how we allow or don’t allow tenderness to present itself amongst boys and men, which is an important conversation on its own.

My daughter is so like my father and myself in those same explosive ways. She could be having a regular morning and suddenly she won’t like how her pants fit or she’ll break down while playing with a toy she can’t maneuver well. Her fits of anger are almost always unexpected. My son, on the other hand, is more quiet and reserved, although when he does get angry about something, the emotion ensnares him so that he can’t verbalize his need and it takes a while to calm him down. All of this is connected in some way, and I’m trying to make sense of it. The best I can do is try to understand my parents and my past as it relates to my future, try to arm myself with the tools I need to equip my children to try their best in their own lives.

I think we have to be kinder with ourselves, to understand our own needs as parents. I don’t want to explode or yell, and yet, sometimes I do. Some days there are so many little things that set me off, all I can do to keep from completely melting down is shutting myself in my bedroom with the door closed for a few minutes and breathing, rocking back and forth, trying to soothe myself and calm down to an equilibrium so that I don’t unleash on my kids. Explosiveness may very well run in my family and maybe there is a reason for it, which I’m on a journey to discover. Maybe creativity and tenderness also run in my family, and by allowing ourselves to be seen in all our vulnerability, this is how we pass it on.

To remain soft in a world that praises ruling with an iron first is revolutionary. This is hard work. This requires examining where our own fears and reactions stem from, our own history, and the hand we have in healing. I feel progress when my four-year-old daughter and I sit and discuss our feelings, or when she takes it upon herself to go to her room after a strong emotion to calm down, saying “Mama, I needed some time for me.” I see it in my son who, at only three years old I can already tell is the type to wear his heart on his sleeve. When he’s happy his whole body shows it from the way he runs excitedly to the huge grin on his face. And when he’s upset, he cries uncontrollably, searching for the comforting arms of his father or me. We are their soft space, where I hope they always know they’re free to feel or say their truth. A tenderness I hope they carry on into their own futures, their own healing.

After a few moments of hugging, I give my kids a kiss each on their head and they move on to play individually with their Legos. I tell myself that this is the last time I will yell, knowing fully well it won’t be. Parents are not infallible, we are human and very fallible. I go to the dining room table where my cup of coffee is still waiting for me, take a sip and a seat, still in view of my kids playing in the living room. I swish the cold coffee in my mouth, let its bitter taste jolt my tongue awake. Every now and then one of my kids runs up to me to show me what they built, and I sit there just watching, leaning both into my body’s need for stillness and my kids’ need for attention. In ten minutes or so they’ll need a snack or beg for TV or run off chasing after each other, but right now there is a calm. We bask in it, smiles nestling on our faces.

Illustration by Cassandra Orion
Thanks for reading! If you enjoy Raising Mothers, please consider making a one-time or recurring contribution to help us remain ad-free. If even a fraction of subscribers signed up to contribute $1 per month, Raising Mothers could be self-sustaining!