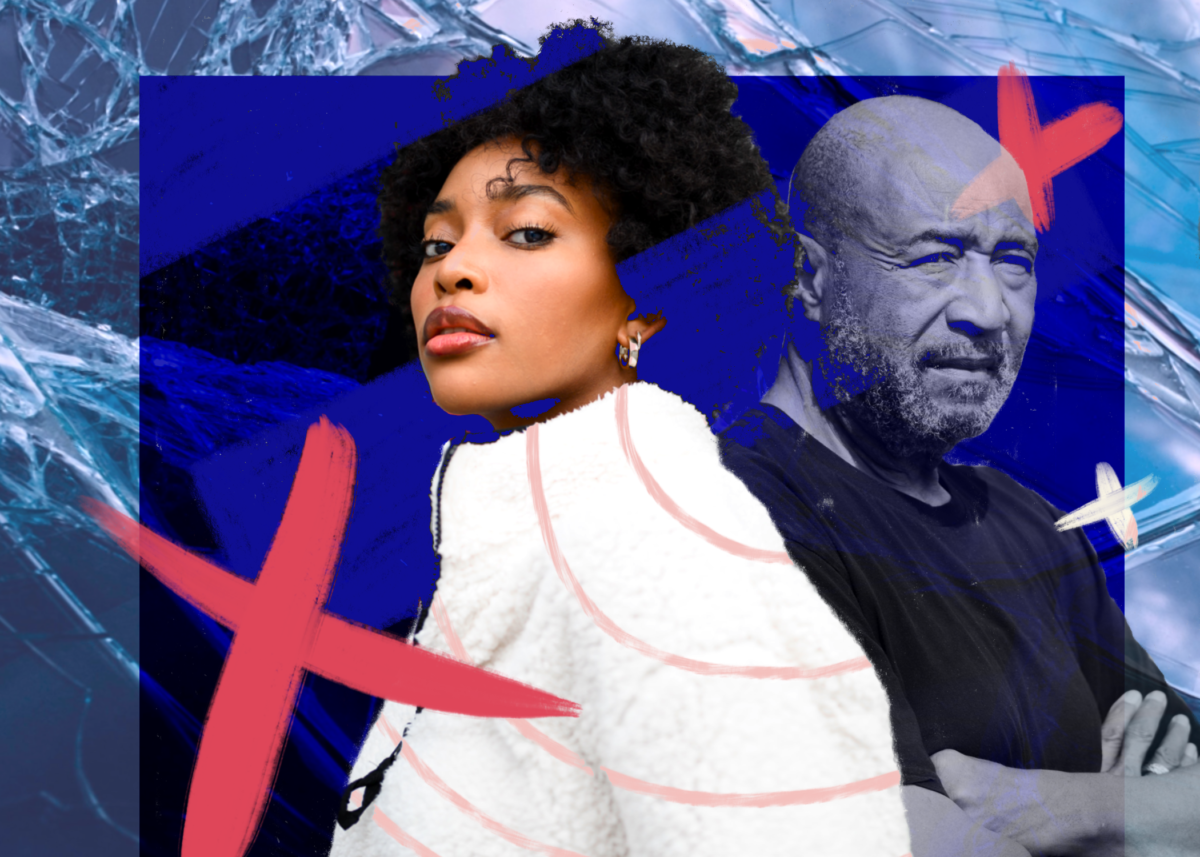 The intercom buzzes and I slowly get up to let in the delivery person. Standing there, I instantly recall all of the times I’d stood in that doorway waiting for him to come walking through the fire doors and down the hallway to my apartment. There was never a time that he came walking down that hallway empty-handed. Whether a gift for me, a toy for Theo, or coffee and donuts, he didn’t know how to stop giving. Supporting. Showing love.

Tipping the delivery person generously as the old man taught me, I sit at the breakfast table and slowly eat my food. It’s slow-going business because of the pounding in my skull, but between the omelet and the dulcet tones of the British accents on my TV behind me, my head begins to feel marginally better. I look at the clock. Only 4 more hours until I pick Theo up from school. So much to do and not enough time to do it.

Wait, what do I have to do again?

I feel the moisture on my hands begin to accumulate. My jaw clenches.

“What is wrong with you?” I say aloud as I sigh and shake my head.

I knew what was wrong with me. I knew that the more tasks I performed concerning his death, the more it was a constant reopening of the wound. They were like tiny paper cuts being drawn across the edges of an open wound. There were so many duties, decisions, and responsibilities. What I wanted most was to lie very, very still for a very, very long time. Because when I was still, my head stopped hurting so much, and so did my heart.

I sit back down on the sofa and watch the television without hearing what they’re saying. After a few minutes, I go from sitting to lying down again. I scroll through Facebook, watch more episodes of the show, and before I know it, it’s time to get Theo. I’ve done nothing. Every time I thought of what needed to get done, I felt paralysis in both body and courage. So, I did nothing. It was all I could do today. It was all I could do yesterday, too. I have hope that tomorrow will be different. It is a hobbled, limping hope. I don’t entirely trust it, but I want to.

Wishing I was the kind of person who wore hats, I pull my hair up into a messy ponytail, thank all the gods that it was Friday, and throw a light jacket over my stained T-shirt. Walking the five blocks to Theo’s school I pray that he’s had a good day today. I’m starting to wonder if I’ve made a mistake in putting him back in school. I think of the immensity of homeschooling him again after everything that just happened in our lives and I can’t imagine it would be a good idea for either of us. The lesser of two evils at this point was for him to be in a brick-and-mortar school. At least in school, he’s able to build socio-emotional skills with peers, I rationalized. It would have to do for now.

Coming up to the block of his school, I see the crossing guard, a woman I’ve known since we were both students at this very same school. She hasn’t noticed me yet, so I have time to slip into my social face, which I’ll need for the school staff, other parents, and myriad kids. Some days I’m actually grateful for these brief moments of relief. While talking to fellow parents, chatting it up with school staff, and just generally being present to what was in front of me, I was able to escape the intensity of the heartbreak.

Buddhist teachings are so effective as a way to mitigate suffering. Becoming a Buddhist had given me so many years of relief during times I was in deep pain, and sometimes it was through something as simple as, “Just be present. Just be right here, right now. Let everything go but this very moment you are in.” Being present, deeply present, is often the answer to many things. In those moments of true presence, engaging with others, listening, and sharing laughs in that schoolyard, my father was not dead. That thought, “My father is dead,” preceded every thought when I sat too long in my head, but at least I was not there in that emergency room. I was in a schoolyard picking up my third grader. I was no longer swimming through shards of glass.

“Happy Friday!” I shout to my crossing guard friend as I approach the corner.

“Happy Friday!” She smiles. “Any plans for the weekend?”

Me, in my head, “I’m going to sip mimosas all day and get just tipsy enough that it dulls the pain a little but not so much that I’m a danger to my kid. What about you?”

Out loud, “No, nothing major. Just gonna hang out at home and watch too much TV. What about you?”

The exchange lasts a few seconds, a good warm-up for game time. I round the corner and walk over to the opening in the gate, where all of the parents, caregivers, and after-school counselors from the nearby after-school programs have begun to slowly flood the schoolyard. I see a parent from Theo’s class and smile. She waves at me, and just as I start to walk over to her, one of the school’s guidance counselors walks over to me and pulls me aside. I love both of the guidance counselors at his new school, but this one is my favorite.

“What did he do?” I defeatedly ask.

She’s already laughing before she can start talking.

“You know I love this boy, right?”

She covers her mouth but the laughter spills through the spaces in between her fingers.

“He got detention today…”

A sigh escapes from the sadness that lives in my solar plexus.

“But let me tell you why. A boy kept calling another boy a ‘faggot’ and Theo wasn’t having it. He told the boy to stop being a bully and the boy wouldn’t. He told him to stop and the boy not only told him that he wouldn’t but then asked Theo what he was going to do about it.”

“So, Theo slapped the crap out of him, turned around, got an adult, and told them his friend was being bullied. When the yard attendant got there, the bully was crying, saying that Theo hit him and knocked him to the ground. When Theo was asked if he did that, he looked at them square in the eyes and said, “Yep.”

At this point, I’m shaking my head and laughing as well.

“Then he gets taken to the Principal’s office, who then tells him that he has to get detention for hitting. That he understands why Theo did it but that it isn’t okay to hit people. He then asks Theo if he understands and Theo says, ‘Yes.’ He then asks Theo to tell him what he will do next time if there’s an issue with a bully, and this child says, ‘I’m not gonna lie to you. I’m probably going to hit him again.’  The assistant principal and I had to walk out backward right then and there because we were laughing so hard that we were afraid he would see us.”

At this point, we’re both wiping tears.

I want to call my dad so bad at that moment, my hand flies to cover my heart as if to keep it from breaking. Through 42 years of ceaseless love and support (and so many fights and misunderstandings), the one thing he and I could always count on was an immediate need to call each other when something funny happened. In the past 8 years, my son had been alive, many of those calls ended up being about something hilarious he did. Something my dad and I were supposed to chastise him about but usually laughed. Wanting to call him now pulled me into an abyss that was growing familiar. I needed to pull myself back into the present.

Once Theo comes out, the three of us have the customary conversation about not hitting, about how important it is to stand up to bullies and stand up for our friends, but that you should always get help to resolve the issue, not resort to violence. We leave the schoolyard, and he seems appropriately chastened, but in that instance, I feel like a hypocrite. There was very little in me that didn’t see Theo as a hero in this situation, and I needed to make sure that I expressed that.

“What I said in there I meant. Resorting to violence is not the answer.”

“And also, what you did in there makes you a hero. It’s not always easy to stand up to bullies. I’m proud of you for protecting your friend.”

His eyes grow wide, the skin on his forehead creasing.

“I am. And you know what else? Grandpa would be really proud of you, too. He couldn’t stand bullies. It’s why he became a police officer. He wanted to protect people from bullies because bullies often become the bad guys of this world. And to grandpa, he was put here to protect people from adult versions of guys like that kid. So, yeah. He’d be super proud of you today.”

“Should we pick up some ice cream as a hero’s treat for dessert?”

The smile doesn’t reach my eyes. My eyes fight back tears at the thought that I won’t get to call my dad later and share any of this with him. He would’ve laughed so hard at this. My god, how he would’ve laughed and laughed.

Illustration by Cassandra Orion
Thanks for reading! If you enjoy Raising Mothers, please consider making a one-time or recurring contribution to help us remain ad-free. If even a fraction of subscribers signed up to contribute $1 per month, Raising Mothers could be self-sustaining!