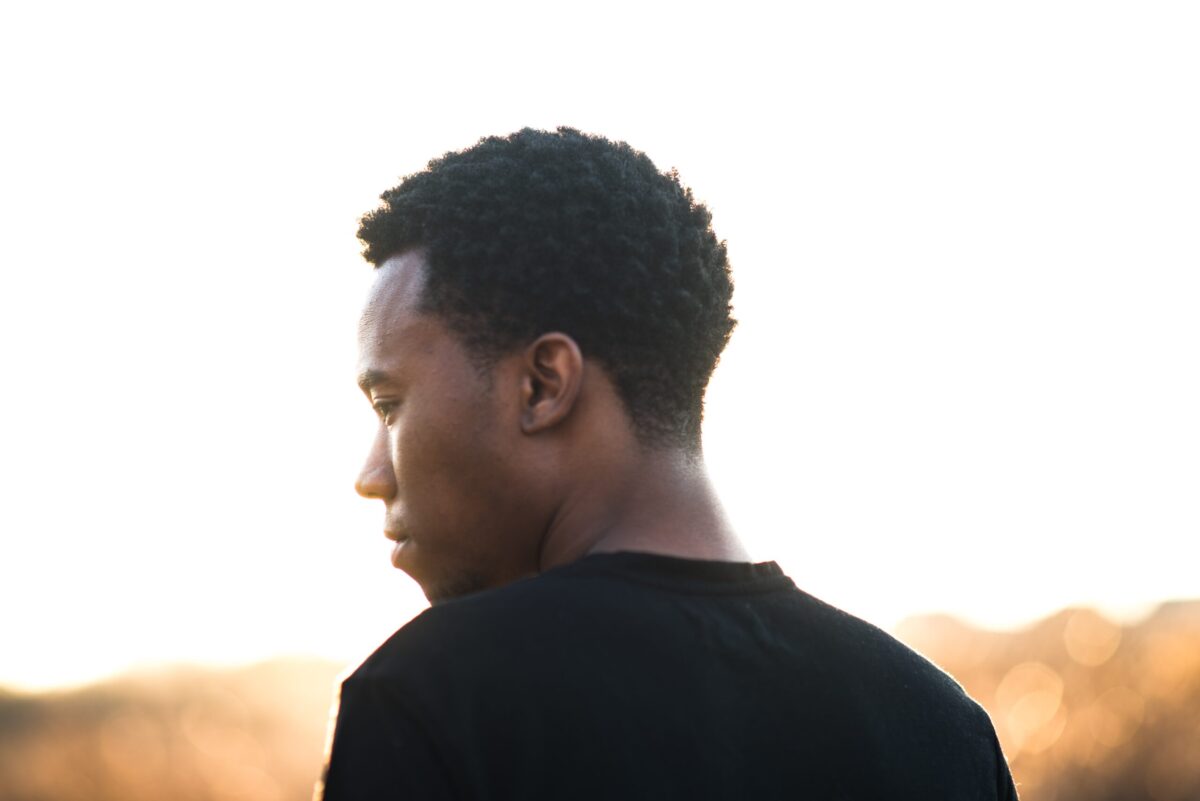 Our recent heartbreaks and heartaches from the past five years shaped us to be the people we are today. As Eric. As Linda. And mother and son. As advocates. Here are a few snippets and snapshots from our lives from the past 5 years that I hope will inspire you.

Eric’s gift is his profound spirituality. He has had a thirst for GOD and a fascination with the church since he was a child. Always say his grace before meals and he prays before going to bed. He even wears the name of Jesus shaved on his head. He never wants us to miss church. Eric takes notice of the things we take for granted, like flowers and sunshine. Children, the elderly, and the homeless hold a special place in his heart.

When Eric was 11, it wasn’t so much being autistic that concerned him. Being autistic has become a part of the way he lives. Finding out he needed heart bypass surgery took him by surprise. He felt the hand that life dealt him was going to become a lot harder to play.

The Trials, Tribulations, and Triumphs that Come

I was working in the private sector at the time he needed the surgery. When I told my boss I’d be out for a while, she said the agency couldn’t afford to hire a temp and pay me while I was away caring for Eric. She informed me that spoke with the human resources department. They later contacted me about signing a mutual termination agreement.

Because I hadn’t been there a year, I couldn’t apply for support under the Family Medical Leave Act (FMLA). My head was in my hands, trying to figure out how I was going to care for myself and Eric. I was heartbroken and felt completely alone.

Woodstream Church, where we attend, was exactly what we needed for this unexpected crisis. They raised more than $12,000 for us through a GoFundMe campaign. People prayed with us and brought so much food to my house that I ran out of space. The outpouring of love was unbelievable, like something out of a movie. And fortunately, my son’s surgery was a success.

Our traumatic experience is now serving as a model for others. The 1029 Media Group, LLC, covered our challenges and eventual triumph in two documentaries. The title for the first movie is Eric’s Faith: A Documentary of Faith and Family. Part 2 is titled, Eric’s Heart–The Eric Grantham Story]. These two movies share our experiences regarding Eric’s autism, faith, and surgery through interviews with myself and Eric, local stakeholders from our school, local community, and support services, as well as supporters nationwide.

Eric has since met several well-known entertainers, as well as local and national religious, political, and governmental leaders. In 2017, and again in 2018, we were invited to the White House Summit for African American Youth with Disabilities.

Our experiences influenced the advocacy work we would later undertake to raise awareness for children with ASD and other invisible disabilities on both a local and national level.

Learning to Become an Advocate for My Son

When my son Eric was younger, he knew he was different. People in my life didn’t understand his autism. I tried to explain that his senses of touch, smell, taste, and hearing work differently than in other kids. They did not know what sensory processing disorder was or how to communicate with children like my son. His peers avoided him because he was different. He found acceptance with the younger kids who would play with him, but even for that, others judged him.

My heart ached from my son’s low self-esteem. I cried because of Eric’s rejection and feelings of loneliness.

Because I was so concerned and protective, people dubbed me a “helicopter mom.” When Eric was about 8 or 9 years old, some men in our lives wanted to rough him up. I knew this approach to “toughening him up” would do more harm than good. Targeted roughhousing could cause him emotional harm, and I told them so. They defended their approach as “teaching him to be a man.” I explained it would instill violence in him. There are other ways to teach my son how to be a man that do not involve that kind of laying on of hands.

But harm is unavoidable. One time, a friend invited us to a cookout.

“Linda, you are so protective of him,” my friend’s mother would always say. “Let him come in the yard with the kids to play. He will be ok. He’s right here in the yard. I’m watching them.”

I was hesitant, but went ahead with it. Moments later, my son returned covered in red juice from head to toe. The other kids at the cookout didn’t like the way Eric spoke because of his speech delay; so they all poured their juice all over him.

I cried more than he did.

I can remember being in the grocery store with my boyfriend. Something in the store made Eric scream and cry, then kick and bite me. Instead of helping, he walked to the other side of the store like he didn’t know me and my son. I was so very hurt. I ended that relationship.

To get us through these hard times, I prayed and thanked the Lord for my son. After these experiences, I made a conscious decision to move to Montgomery County in Maryland. I wanted to make a fresh start in a different place. Being isolated like this, in a good way, helped build my faith. Although I separated from all that I knew, I stayed in contact with my sister, Channie. She was a lifeline for us both.

Channie and Eric had a very special bond. He loved her, and she loved him. She would call him and talk to him. Unfortunately, she passed away in 2019. Eric is still in therapy because of her passing. He misses her so much.

But now, moving to this new place, I had to educate myself on how to help my son.

One person who helped was the head doctor for children with developmental delays at Children’s National Hospital in Washington, DC, who I bombarded with questions. Then someone suggested the Prince George Community College Children’s Developmental Clinic.

This was the turning point in my life.

Learning how to be an Activist: The Blue Runway for Autism

Clinicians from the college worked with children to teach them motor skills and speech. During one visit, Debra Martin, a facilitator and a legal advocate, was educating the parents in the next room. She taught me a lot about Autism Spectrum Disorder (ASD) and how to help Eric. Later, I found out Debra is a member of my church. It was as if God had placed her there specifically for me and the other parents. Now we work together in the community to promote autism awareness.

For a long time I was thinking about how I can help my son, and other children like him, feel more confident and special.

Whenever Eric dresses up, his confidence skyrockets.

This is when I realized I should start a platform to encourage and promote positive self-esteem in people with autism and special needs.

I created The Blue Runway for Autism. Through fashion shows, we promote and encourage a positive self-image. Macy’s, Lord and Taylor, and other companies co-host our fashion shows. My goal is to inspire people with autism and other special needs to believe in and embrace their own unique abilities to achieve greatness. When I see these beautiful people with disabilities walk the Blue Runway, feeling amazing and confident, I’m always moved to tears.

The Blue Runway for Autism also uses its platform to educate and advocate with law enforcement about autism and other hidden disabilities. When George Floyd was murdered, I realized I needed to have “The Talk” with my son in order to keep him safe if the police ever stopped him.

Autism is an invisible disability. My son looks like a typical Black teenager. But I worry if the police stop him, he could not follow their commands.

One time, we reviewed what he should do when confronted by the police.

“What should you do if stopped by the police?” I asked.

“But my friends that have autism would get shot by the police because some of them would run and not be able to do what they [the police] say to do. Mommy, you have to do something right now!” he demanded, with tears rolling down his eyes.

I told my son that I was going to ask law enforcement to meet with us, Eric’s friends and families, and people in our community who have invisible disabilities like brain injury or bipolar disorder.

Debra Martin was the first person I called to tell about my plan.

Since the color blue is associated with both autism and police officer uniforms, “DRESSED IN BLUE” was born. Through workshops and presentations, we assist officers in developing different thought processes that allow them to approach potential confrontations with a de-escalation lens. This could save the life of someone with a disability that isn’t visible. Every time we host a program, cops tell us that it is one of the best, far outweighing any previous textbook-style autism presentations they have had to attend.

Eric has since asked me to take him to Congress to discuss legislation for people like him.

People ask me, “Is your son disabled?”

I think of him as having uncommon abilities.

I see Eric’s autism as a positive aspect of his personality. I wish there were more people like Eric in the world. Talented, creative, community-minded, and fearless. When I think about his accomplishments from 2016 until now, GOD has truly blessed him. He is undeniably one-of-a-kind.

Being Eric’s mother has taken me to places I never thought I’d see in my life. I’m often asked to tell our story and have Eric sing to inspire others. I am a God-fearing woman, a business owner, an advocate, a music producer, a writer, a counselor, a storyteller, a mother and father, and a friend. Above all, I am Eric’s helicopter mom.