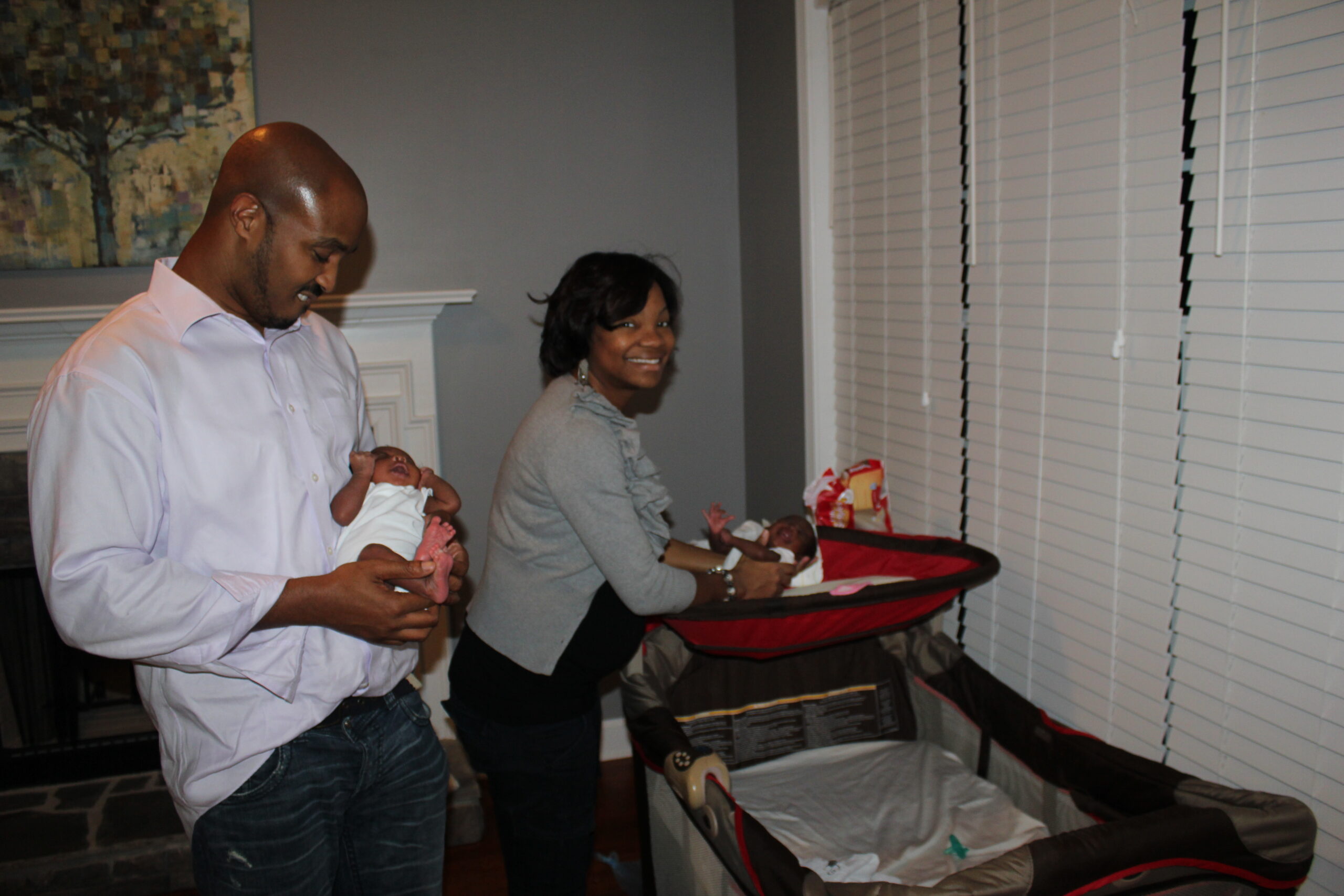 My milk was starting to come in, and I went to the salon.

I had to have my hair done. People were coming to the house, coming to see the new babies, twins, and I wanted to at least look better than what I felt. My hair was a matted mess from days of being uncombed. I’d skipped more than a couple showers, more than a couple hours of sleep. So, couldn’t I get a few of those hours back and get my hair done? But the babies were hungry, and my milk was just starting to come in. I nursed them, but then went on to my appointment.

My stylist turned the chair to face the mirror where I could see myself. Where I could see the flat iron smoothing the coils and the kinks to a mahogany flow. I felt a sense of relief—a moment for myself.

“Look at you, already out the house. Who’s watching them babies?”

“My mom.” I pulled out my phone, showed her the pics. The boy, the girl, swaddled and peeking back at the camera.

She bent down for a closer look. “Oooh,” she fawned then rose, taking the comb to part and tug taut the next section of hair. I felt another tug too, my breasts, swollen and pulling the bra straps.

But when that relief finally came, four hours later, it was not enough. Not for my babies. Weeks trickled by and my nursing sessions never felt like enough.  I’d tried Mother’s Tea, advice from friends, what seemed like hours upon hours of incessant nursing, walking around the house topless. But to no avail—my milk was low, and we supplemented with formula.

Still, I was determined. I wanted my babies to have the best. It seemed like it worked for everybody else, so why wasn’t it working for me? When we left the hospital, they were latching on fine but latching on wasn’t the issue. I called the lactation nurse. It was the only thing I hadn’t done. The call had replaced an in-person appointment, and for reasons I can’t recall now, we were unable to make that appointment, so they only spoke with me over the phone. I was in my car in the garage, talking to her through the car’s Bluetooth. She was explaining why it could be that I wasn’t producing enough milk. “You have to wake to feed… from the beginning…every hour or so…build up supply.” I remember sitting there staring at the steering wheel as she spoke and thinking of the two hours I spent at the salon and the fifty-minute drive to and from. Because, yes, I live in the suburbs way south of the city where my stylist at the time was located. I remember thinking, too, of the naps we took throughout the days. No one told me I needed to wake them every two to three hours, did they? That, I couldn’t remember. What I could remember was being told to sleep when they slept.

This is my past.

More weeks went by till the night I was sitting “criss-cross apple sauce” in the middle of my bed. It was sometime after five in the morning. My babies were wailing and I was too. It was cold and dark, and early December. Three months. It had been three months of trying. I went down the hall, down the stairs and into the kitchen. I grabbed two bottles from the six-pack of formula. The pack I sought out at the store. The pack I picked up then put down, my head dropping in self-checkout as I swiped the blue and white cans of altered cow’s milk across the scanner. That early December morning, I shook those cans, tears streaking my face, then took two Avent bottles and accompanying nipples from the bottle rack. Bottles that were supposed to be for preserved breastmilk, for my husband to get to feed the babies, for my Mama too, when she came over to help.

That was the day I let it go, the desperation to nurse. My two babies were steadily hungry, tired, and losing pounds. Steadily crying. My breasts were swollen, but it was never enough. This was no longer a healthy feat. That early December morning, when I finally opened the formula—not to supplement, but for a full feeding—I was done. I’d tried and I was done. I wiped my face, fed my babies, and left my shame right there, bunched up in sheets damp with all of our tears.

I bought another case of formula and told myself I’d leave it all behind.

I thought I left it all behind.

But there’s a quote from the late writer, Katherine Anne Porter: “The past is never where you think you left it.”

Just last year, we were visiting friends, my husband and I. They’d had a baby girl. I was holding her upright on their breakfast table, cooing and making faces while her mama prepared to feed her. When she came to take the baby upstairs to nurse, she turned to me. “Thanks, girl,” she said. I smiled, watching, as they left the room, feeling the slight sting I often do when I see women nursing or hear conversations surrounding the act. Because I failed at it, and as pitiful as it may sound, I still have regrets…nine years later.

Yes, I know I have to let this go. And though I don’t harp on it like I did for those first two years—I still ruminate any time a friend brings the topic up. “Girl, I can’t wait till I can wean her off.” Or, “I can’t stay long, gotta get back home and feed.” Or I’d associate any slight delay (my son took a little longer to raise his own head) or symptom (once their pediatrician informed me they had a vitamin-D deficiency) with this failure to breastfeed—to say it never bothers me would be a lie. The moments are seldom these days. They come and go, but they still come.

“The past is never where you think you left it.”

Maybe it would’ve changed everything if I’d understood to wake the babies more often to feed, or if the lactation nurse had actually come by my house, or if some other trick had been applied than those I tried—and I’d of been this zombie warrior with a badass ’fro and milk singing from my breast. Maybe. I’ll never know. What I did know was that my babies needed adequate nourishment and sleep, and I needed sanity and whatever sleep I could grab.

“The past is never where you think you left it.”

“The colostrum’s what really matters,” I was once assured, referring to the first day’s sustenance the twins had received at my breast, like a consolation prize. For a while, this tidbit carried me. It carried me through days then weeks. Then came the well-baby appointment. The one where I told our pediatrician I’d transitioned fully to formula, watching for any shade to pass through her eyes. None did. She only smiled, nodding her head and nothing more. So was this even an issue? I sat, trying to read more into her expression. She simply moved on, providing guidance for formula feedings.

I’ll find myself in a gathering of moms – new and seasoned—and that inevitable moment comes when a seasoned mom will reminisce about breastfeeding, swapping notes with the others on its benefits and how long she did it. She’s proud, valiant, because whether you succeed or not, who can argue the beauty of such a demanding and selfless act? Even those that harp on what they claim to be public indecency usually won’t argue against the act itself. Guilt and shame link arms with me like I never left their side.

I thought I left you.

“Twins? Oh, how did it go for you?” or “Did you breastfeed?” or some variation along those lines forcing me to answer.

My response vacillates between a resolved no and blubbering explanations of why:

“For the first three months.”

“I tried, but I couldn’t get my milk supply up—make sure you’re waking that baby.”

Then I’ll see articles with titles like The Benefits of Breastfeeding, and I grow heavier still. My two have a nut allergy so what if…is there any correlation? The worries compound.

But then there’s the truth.

What I know and see every day. I have a little boy who plays baseball and basketball with a smile that seldom leaves his face, who talks a little too loud at times and loves to read in bed at night. I have a little girl who loves making animals from empty towel rolls, who’s as silly as she is bossy – “shushing” her brother in her determination to be the lead and thriving in her school’s gifted program.

“You turned out fine.” Mama once said. I did, and my mom didn’t breastfeed me. She couldn’t; I was adopted.

I’ve seen the articles, heard the data. I don’t doubt the merits, but they’re not God-send. My children are. This is what I know.

What we don’t always know is where our past really is. We think we left it, but maybe we went and picked it up telling ourselves it’s something else. Maybe we thought we left it, but it’s only following us, hiding when we turn to look. Maybe we did leave it but only for a time. Or maybe…we left it, and we have to remind ourselves to leave it again and again.