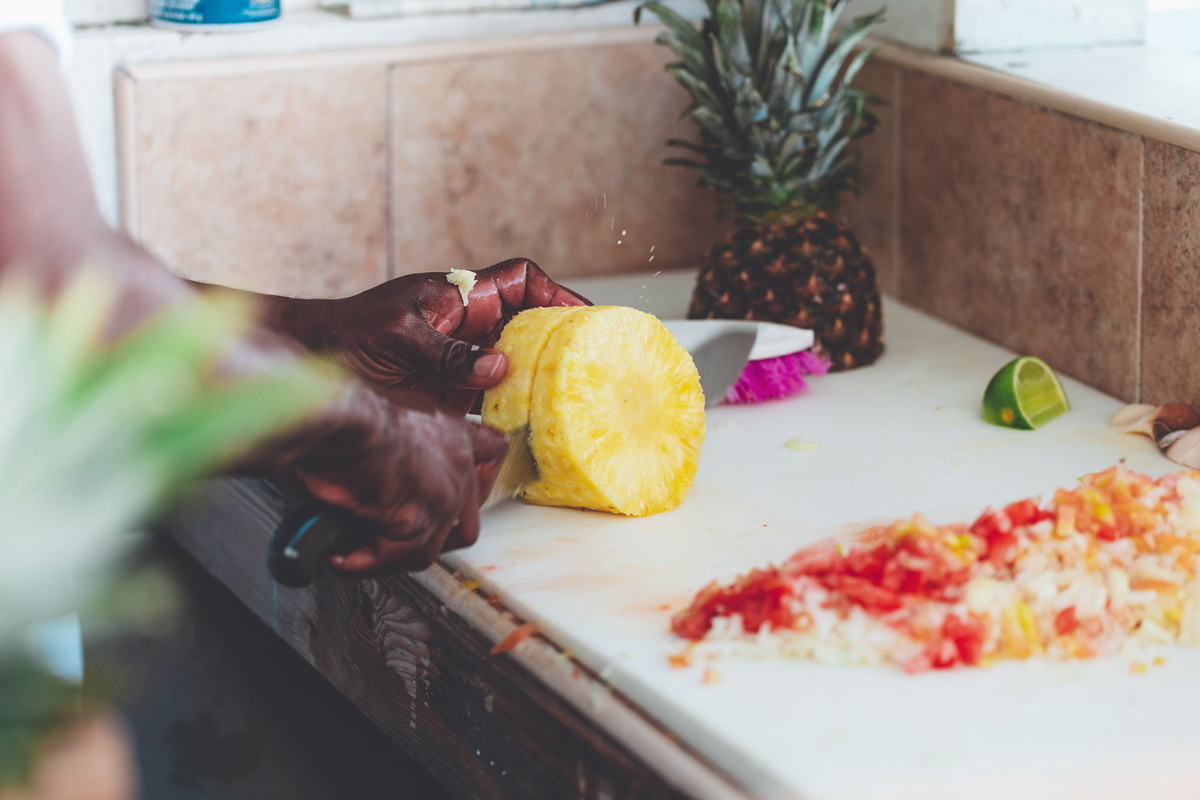 A food photo? A tray full of broccoli and peppers—jungle green, marigold yellow, and vermilion—pops open in a text from Cabral. What’s this from my babychile! You beam and coo out loud, safe with no one around to hear or judge your pet name for a married man over 30. Those roasted veggies look good enough to be the cover art of some foodie website. So olive-oil glazed and crunchy-crisp, you want to reach into the screen. You cringe at what your own dinner options include. But these veggies are fresh from an oven, and you recognize the hairy hand in the mitt pulling them out. The picky eater? You blurt out, What? No message comes with the picture. On Cabral’s end, apparently he expects just that reaction. He’s chuckling, leaving just enough time for your sputter before he follows up: Yo, Mom. Making dinner. Looks good huh.

In the after-work grog that nails you to the sofa, doors slam repeatedly. Above the sleep surface that din turns out to be kitchen cabinets. The steady, jerky sequence means the slammer doesn’t know where you keep things. Deep quiet, then bursts of the fridge yawning, chunking. Naj finally shakes your shoulder in hopes of finding garlic. Now he’s busy; the peeling and pounding you hear suggests he’s redeeming those weary buds you bought on impulse, weeks ago. Sublime, a word you hardly ever find cause to use, comes due. Remember, Mom, those cooking shows I used to watch on PBS? Sure, you do. The Cajun Cook, decades ago. Firstborn enters a meditative zone, doing food. Camo cargos over lime green sneaker-feet, at attentive ease. He glides between a heavy-sizzling left burner and a roiling right-side pot. He sambas in an unaproned soccer jersey. Brazil. Unprotected from a saucepan, it swerves. Catches only the splatter of a few dance moves.

You have winnowed this speech down to three or four sentences, starting with your double-standard buster: Being the only woman in the house does not mean you were put on the Earth to feed them. With plain words you lasso the moment, leveled and calm: Everybody at this table eats, so everybody should cook. Looping the logic with a question—Is that true?—you tie it to a plan: seven blank spaces on a piece of paper that reads, Chef for the Day.

This family meeting, one of those which you alone convene, goes worse than usual. A high-pitched quiet plays out among the three you live with: knotted husband shoulders, furrowed eighth-grade brows, and squirming third-grade sneakers. You want the joy of feeling a lifted yoke, the joy of seeing this family put the rut to rest and walk a feminist walk through manhood. You want the shared work of feeding to open their hearts in some way not yet revealed. None of this bears saying, so you watch the empty paper float between two sons and one husband. The quiet seems unyielding. Just before Plan B crosses your lips, Naj snatches the paper. I got Monday and Wednesday. And The Cooking Schedule Years begin.

Few who see your modulated burst into 30th Street Station know you’re carrying a gong. It hangs where your lungs and heart should be. You’re just a well-preserved middle-ager in scruffy black Uggs, whose spiraling locs overhang a fuchsia coat—cute but too thin for March. Clearly, you’re no stranger to this station. Nothing slows your eyes; your gaze sweeps past the homeless. Pushes aside the strutters, Auntie Anne’s Pretzels stand, and tantruming toddlers. Sorting, sorting for the one moon you’ve seen rise through its twenty years of phases. One husky, hoodied, curly-bearded face. Who sees you first and tips around the room to sneak up and tap, spin you backwards, giggling. Your gong’s clang marks the start of his Spring Break.

Yeah so, I’ve been baking lately. Gonna make y’all some bread while I’m home. One heavy arm drapes on you while he asks a favor, as if you’d refuse: I’ll need a few supplies. Flour and yeast. Lots of yeast. Do we have a rolling pin by chance? Winking at you, the breadoholic who lent him the gene.

Naj is caramelizing onions. You’ve learned to stay out of his way when he’s cooking after the lecture you got for disparaging the value of paprika. Waiting for the dinner bell, you and the Mister tip around upstairs like kids on Christmas. The sight of his lithe performances, always matched to tunage of some sort, makes it hard.

Playing stealth, you cut through the dining room and peek at a distance. He knows. Ma. Let me show you something. Long graceful fingers press the knife into celery; he tilts his head to wave you out of hiding. Those almost-black doe eyes fix on his point but soften to ensure that you understand. He knows how you approach cooking. You, the one who ended up Chef for the Day only once out of every seven. He holds forth about the science of savory. Fats and salts. The value of fresh basil over store-bought. When dinner comes, you and the Mister swoon by the forkful. Naj takes in the praise like a curl of air. You suspect that he smiles on the inside, but outside, it looks like a shrug.

These men you made can burn. And far more joy arises from what they do than you bargained for. Thinking and planning, ordering those plans and imagining. Reading, calculating, refining their senses. Connecting to their elders through a task women have so typically been pressed to do. Savoring their emotions by learning how it feels to labor for the sustenance of others or simply their own. Cooking centers their spirits, teaches them about needs, wants, and paths to satisfying both. Did you have all that in mind with the cooking schedule?

Your husband cooks. Most of Thanksgiving dinner is his doing. You wanted to ensure that they became men like him. Men who don’t passively receive, waiting and expecting, weighing someone else down. You wanted to stir them actively into the work of being a family.

And yes, you wanted to know what being called to eat and sitting down first would feel like. A wholesome bliss that seems unspeakable, except for a tradition the four of you began with Chef for the Day: Thanks to the cook.